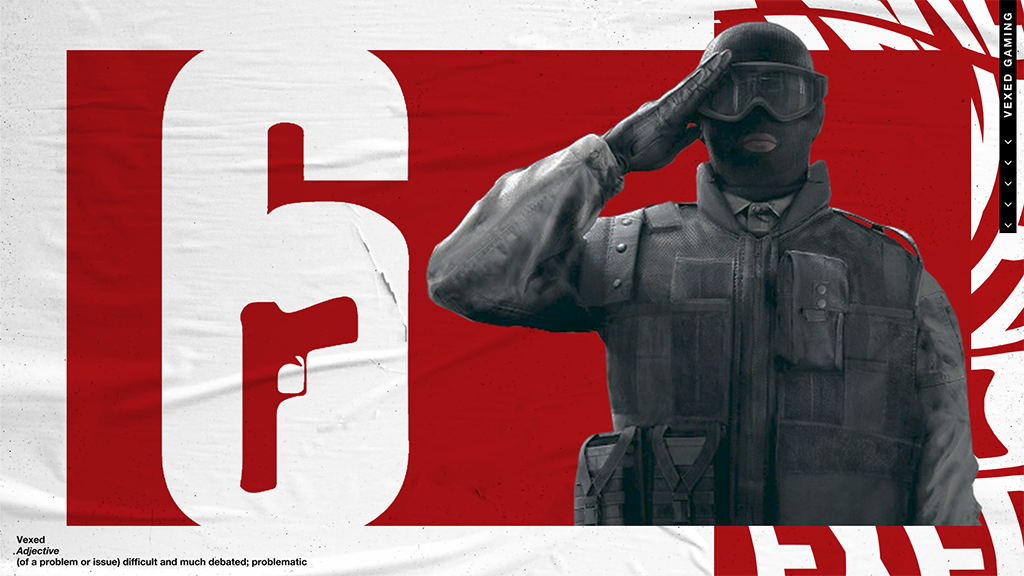 Hey, I’m John Myerscough, a writer here at Vexed Gaming. Rainbow Six Siege is a game I’ve always liked the sound of but have never actually gotten around to buying. I think this is mainly to do with the lack of people to play with and my competitive brain thinking I wouldn’t have enough time to devote to the game to be good. Since writing for Vexed and tuning into their own Siege team compete in the ACS and the Rainbow Six UK and Ireland Nationals my interest in the game has peaked. With lockdown still keeping me mostly indoors for a while, I thought now would be as good a time as any to bite the bullet and breach in to Rainbow Six Siege.

Loading up Siege
Upon loading up the game I thought it best to have a quick look through the menus and try and get a feel for who I can play as. It was at this point that Siege’s sheer amount of unlocks and playable operators completely blew my mind. I’ve since come to learn that there are 56 playable operators in Siege! Straight away I felt like this was going to take some playing time to get used to.

First game
For my first taste of Siege, I jumped gung-ho into the Newcomer playlist designed to help new players get to grips with the game. Playing on the Chalet map, I decided to choose the Recruit operator for my first game to get a feel for the mechanics and gunplay. Rd 1 went well, we won, and I got 2 kills in the process. I was feeling good. How hard could it be, I asked myself? Well, the rest of the game gave me a small taste of exactly what was instore for me. The first few rounds felt chaotic and the number of sightlines to consider where enemies could shoot at you blew my mind. Players would open the smallest of holes in a wall, spot an enemy, then proceed to blow up both the wall and the unaware enemy player using a breaching charge. Ceilings would collapse to open up new alternatives to the stairs, which had no doubt been booby trapped by the enemy. Gaps under doors allowed you to shoot your enemies’ feet and even get a kill. The myriad of gadgets allowed for endless gameplay opportunities. In the end I was victorious in my first game, but my 2 early kills were all I could muster, my teammates instead doing the heavy lifting.

Second game and more
My second game was on the map Bank. It was in this game I really understood how much there would be to learn in Siege; the infinite amount of sightlines, the accuracy needed to pull off a clean one-shot headshot, the teamwork between operators, it all seemed like it would be impossible to learn. (Getting team killed whilst trying to change my controller sensitivity didn’t help either).
Team killing and terrible performance aside, I still enjoyed my second game, at one-point, rappelling upside down, through an open skylight to kill an enemy player made me whistle with satisfaction. I found the sheer creativity of Siege refreshing and it really set the game apart straight away from other first-person shooters I’d played.
After my second game I took a few hours off to try and understand the game a bit more. After some YouTube videos and helpful articles, I was ready to jump back in.
I found Frost to be the operator I gravitated towards the most. Her Welcome Mat trap helped me take out a few enemies, and her shotgun’s damage made up for my lack of accuracy when it came to shooting. The maps continued to perplex me but, like any game, that’s something that only comes from hours and hours of playing. Although many of the games ended up as spawn, barricade a door then die, there were games where I managed to get some actual kills, or even pull off a sneaky flank to get the drop on a bomb site. Each time I pulled off one of these small victories I felt elated. I was improving! I would then be brought back to reality by immediately dying the next round, but hey, small steps. The more and more I played Siege, the more I found myself becoming interested in the game. What are the best routes? Who is the best operator for my playstyle? Do I even have a playstyle? Each map I played gave me more questions that I wanted answering, which made me keep playing and playing. It was a vicious circle of the best kind and one I intend on continuing.

Competitive
Although I stuck to the Newcomer and casual playlists in my play sessions, since playing Siege, I’ve also gained an interest in the competitive scene. Watching the Vexed Gaming team within the Rainbow Six UK and Ireland Nationals against Natus Vincere and how they play the game is eye-opening compared to me running around the map with reckless abandon. It is something I’ll definitely continue to follow and hopefully be able to implement their strategies into my games. Once I stop getting blown up by my own grenades…

I love Rainbow Six Siege?
Overall, I found Siege to be extremely difficult but also extremely enjoyable and rewarding. In my hours of playing I died a lot, but even with the clear skill curve the game has, I’ve found myself to be enjoying the game and wanting to improve, I haven’t felt this type of want to improve since I first played Halo way back in Halo 3. I feel I’m only scratching the surface of Siege’s complexity and creativity and I can’t wait to discover more. Now, if you don’t mind, I’m off to watch some more tips and tricks videos on YouTube.