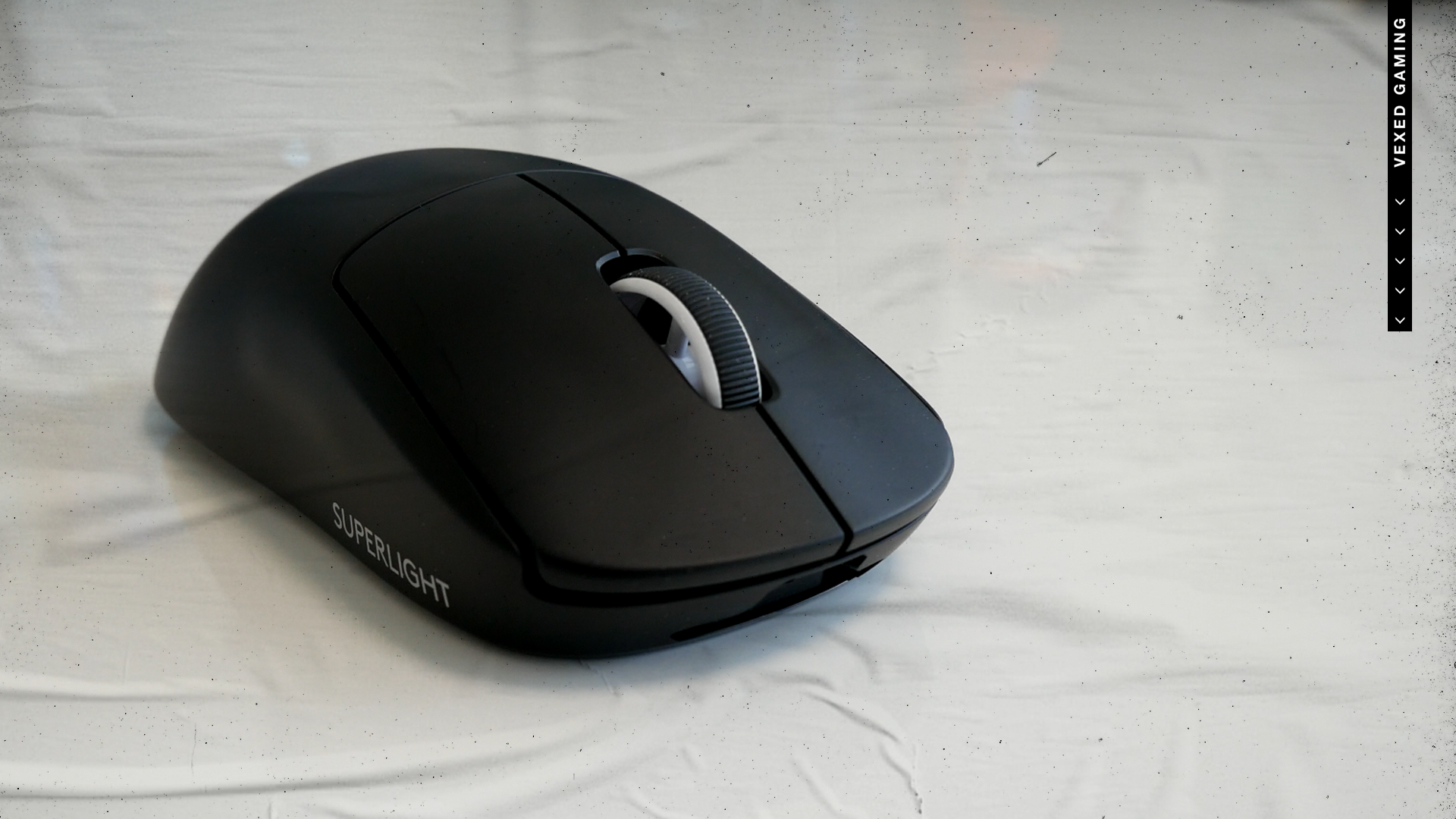 I’m not sure what’s more surprising, that this is my third video review in quick succession, or that I’m pleasantly tempted by yet another ambidextrous shaped mouse.

Make no mistake though, unlike it’s older brother, and despite still being symmetrical in appearance, this new Logitech G Pro X Superlight is definitely built for right handed players and that’s given its side buttons now feature on the left only. I don’t know if we’ll see a left handed version of this mouse in future, but you could still opt for the original if needed – which besides a higher weight – is still respectable and otherwise essentially identical in performance.

In the retail box you’ll find the mouse itself, a 1.8m rubber cable for wired operation or charging, the LIGHTSPEED USB wireless receiver, an extension adapter for that receiver, optional grip tape with cloth wipe and a replacement door with a PTFE mouse foot.

This Superlight variant of the G PRO X comes in at a length of 125mm, height of 40 and width at the grip position of roughly 59mm… and I say roughly because depending on your grip it might be closer to 60 or 61. Logitech’s efforts at reducing weight have had it land at just 63 grams as well, but most importantly, they’ve done this whilst keeping it well balanced and free of any structural issues i.e. I can’t activate the side buttons whilst squeezing – thank god!

Talking ergonomics, this is where I was most surprised, and that’s because it is actually comfortable to use in palm grip. It’s shape is inherently safe with no aggressive curves, slopes or corners and… I’d probably rate it… alongside Razer’s Viper line… as the most comfortable ambidextrous shape for how I hold the mouse, and that’s with my 19.5 x 10cm hands. I get a ton of control with no annoying areas hindering micro adjustments, and I think you’d genuinely struggle to find somebody that couldn’t main this mouse if they tried – but more on that later. Coating is soft and perhaps a touch slippery right out of the shower, but it doesn’t take long for it to warm up and there is optional grip tape in the box if you feel you need it.

Mouse 1 & 2 utilize Omron switches rated for 20 million clicks, and as they’re separated from the top shell, they do remain consistent right the way through. They’re tactile, responsive, and just tight enough to prevent fat fingering one of the primary buttons whilst holding angles. I know some people would like to see Logitech implement optical switches in future, but I personally believe they’ve been unmatched in button feel since their discontinued G303.. so if I had to guess it’d be because they’re waiting to ensure they meet player expectations on a new type of switch. Its mouse wheel is also on point with 24 soft but still well defined steps, and a middle click force requirement that’s, well, just about right too – and that’s as someone that regularly uses it to select the Railgun in Quake. Here’s a listen to all of the buttons:

Underneath you’ll find two PTFE mouse feet – or three with the replacement cover, which compliment the weight and glide perfectly on the several pads I’ve tried. You’ll also be pleased to find Logitech have implemented their 25k Hero sensor with DPI steps from 100 through to 25000. As always, you’ll want to stay somewhere between 800 and 3200 for best results, but it’s nice to know if we ever have 16k displays that you can go that high… I guess. To be serious though, Logitech are increasing this number for both marketing and the casual gamer, whilst retaining performance and reasonable dpi levels for the competitors.

For me there’s only one thing here that really disappoints, and that’s the removal of its DPI button under the mouse. I use 1600 dpi for everything except Battle Royale games – where I reduce it to 800 – and that’s because trying to navigate a death box quickly at high DPI is nothing short of annoying. Most games do have sensitivity sliders though and to be honest, they should also have a Tab slider too, but I can still change it in GHUB quickly and it’s not a big deal.

Talking of GHUB, the G PRO X Superlight is fully supported, but Logitech also offers their Onboard Memory Manager that’s aimed more toward the esports competitor which I’ll focus on in this review. This executable will enable you to quickly change the DPI and onboard memory with no processes running in the background during gameplay – something many TO’s did start to prohibit before the pandemic.

Now as this is my first Logitech mouse review since their iconic PMW3366 sensor, we’ll perform some of my standard in-game tests to determine an expected level of performance here on their Hero 25k.

In terms of acceleration, moving the G PRO X Superlight from the left to right of my MPX 390 at different speeds shows that we end up in roughly the same place – and that’s taking into account some small amount of human error. Acceleration is good and is still used by many professional Quake players today for example, but only when it can be controlled and added by the player afterwards to their preference, and here their implementation is perfect as there’s none inherent to the sensor.

As for its max tracking speed, I can pretty much swipe the mouse as fast as humanly possible thanks to an advertised max tracking speed of up to 10.16m/s, something that I can’t get anywhere near. There have been no malfunctions over several hours of gameplay on the several cloth pads I’ve tried.

In terms of button latency you’ll also encounter no issues and that goes for pretty much any LogitechG mouse since well… forever. They’ve been at the front of the pack for a long time now and have delivered yet again.

Button debounce is also on point as there are no issues with mini-jumps in ShootMania. ShootMania, whilst dead today, featured a feature called variable jump. Here your jump height was influenced by how long the button was held down and an otherwise too high of a debounce time would make our smallest jump instead a medium sized jump, and this is because the button wouldn’t have been released quick enough before the second was activated.

This also means there are no issues with full height rocket jumps in Quake because both Mouse 1 and Mouse 2 can be pushed down simultaneously without delay i.e. you’re not going to be jumping before you shoot or shooting before you jump – you’ll always reach maximum height.

One minor note to end is that Lift Off Distance is not currently customizable. Now I’ve tested a few pads and it’s always been below 1 DVD on the stock feet and, as such, should be fine for almost everybody. I obviously can’t speak for every surface (and especially those of you that like a really high LOD), but if you do like a high LOD I’d recommend lowering it anyway because, as you lift the mouse off the surface, your DPI will shift which can lead to inconsistencies in your gameplay.

So my final thoughts? Well I’m late to the party with this review so let’s make it short and sweet. Is this the best mouse on the market? Well actually, if the shape fits then it certainly could be the best mouse for you… and it’s up there with the very best in terms of performance too – if not leading the pack in areas such as wireless delay. For me it’s certainly close in terms of shape, and I could definitely main it, I’m just a little reluctant to put the time in to adapting from my preference toward ergonomic mice. There’s no doubt in my mind though that, should I really try, I’d have no problem holding angles, tracking enemies and hitting flick shots – I mean I didn’t really. It doesn’t matter if you play Counter-Strike, Fortnite or League of Legends, it’s a one mouse does it all kind of offering and it ultimately does not disappoint. There are currently 34 entries for this mouse on Pro Settings for CSGO players today, and these mice are currently on the way to Vexed players so you’ll be able to gather additional opinions from them too if you’re interested.

Anyway, I’d like to thank both Vexed and Logitech for sending out the mouse, it’s always exciting to get something from Logitech as it’s very rare they disappoint. I’m still waiting for an (ergonomic) shape from them of course, but they’re nailing everything else so it’s not far out of reach. Plenty of time left in 2021, so fingers crossed for a superlight ergo!

In the meantime if you’ve liked the video then make sure to give it a thumbs up, subscribe if you haven’t already and do stop by my Twitch stream where I broadcast weekly. If you have any questions or comments then leave them down below and I’ll get back to you but for now take care, keep gaming and I’ll catch you in the next video.