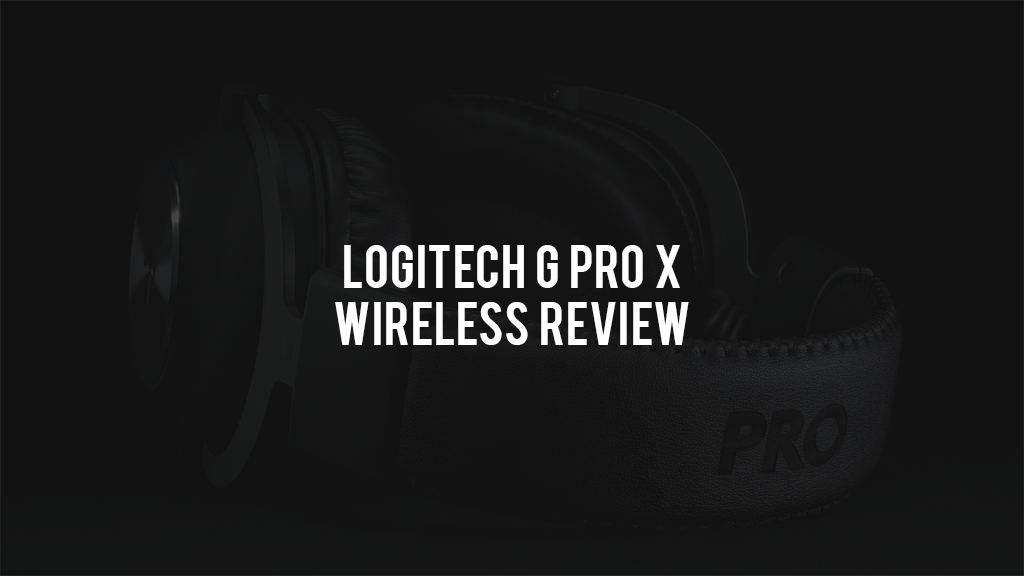 This my friends is the Logitech G PRO X Wireless Gaming Headset, and before you ask, yes it was worth the wait.

Logitech have simply taken their infamous wired G PRO X, and then attached their industry leading lightspeed technology to deliver what might just be the best and most responsive wireless headset that money can buy today. And I’m not kidding either, this thing is so absolutely fast that, like me, you’ll begin to wonder why it took them this long to bring lightspeed to their audio line.

In the box you’ll find the headset itself, a lightspeed usb dongle, a set of more breathable cloth earpads to replace the pre-attached leatherette ones if wanted, a detachable microphone, carrying pouch, and the 1.8 meter usb type-c charging cable – which by the way – is great to see Logitech G adopt.

The G PRO X Wireless Headset features a durable build of primarily steel and aluminum, a soft touch coating, memory foam padding on the top and ear cups, and blue voice technology. I really appreciate the understated design and there’s a good amount of adjustment on offer here for all shapes and sizes of heads. That, and those ear cups provide adequate space to prevent irritation and ear ache over longer sessions. Time of course will ultimately tell for how both the headset and its materials hold up, but my first week has been nothing short of positive and I’m confident that – thanks to their sturdy build and decent weight of roughly X grams – they’ll survive the test of time as you can twist, turn and potentially drop them a few times without fear… plus you won’t be running over a cable with your chair – which is obviously cool. If you do somehow break them, you’ve still got a 2 year manufacturers warranty as standard – providing of course they’re bought from an authorized retailer.

You can obviously use the headset whilst charging, and you’ll find a 0-100 volume dial, microphone mute and power button on the left ear cup. In my testing they’ve lasted for around 15 to 16 hours before the battery has fully depleted, and I’ve been able to wander my apartment without audio crackle or dropouts… something that’s surprisingly convenient whilst you’re waiting for a revival in Apex or Warzone.

I should probably note that, whilst audio will always be subjective, its out of the box sound signature is certainly well balanced to my ears and the bass is present but not overpowering. This effectively translates to the ability to identify positional que’s and footsteps with ease, without boomy atmospherics – or rockets for example – muffling their presence. That, and you should be able to further tweak the EQ for music or movies in G-HUB. If you’re gaming at home I’d recommend installing the cloth earpads, particularly during the summer, but at events those pre-installed leatherette offerings do a fantastic job at aiding with passive noise cancellation i.e. it blocks out a lot of external noise – useful when using a condenser microphone too.

This is how the G PRO X Wireless microphone sounds without the Blue Vo!ce audio enhancements enabled, and whilst it’s rather good for a wireless one, it’s otherwise pretty standard when compared to pretty much everything else. However diving into Logitech’s G-HUB and enabling Blue Voice is where things then take a drastic turn for the better… and this what you’re hearing now with my personal configuration. I’ve added a little to the low end EQ slider and enabled both the gate and compressor, with a touch of noise removal whenever I need to turn on my portable air conditioner. Honestly this sounds pretty damn good and I don’t think anyone would be turned away from your Twitch stream if you chose to use this as your main microphone. There’s also the benefit of having a consistent voice volume no matter where you look, since the microphone will always be the same distance away from your mouth – something many people often forget when looking at different monitors for the game, chat or whatever else. – wired headset experience

So in summary? I absolutely love this headset and I’m certain we’ll see many competitive players and streamers adopt to using it moving forward. To put it simply, it has all culminated into an audio experience that simply delivers – from identifying footsteps and positional que’s in Counter-Strike – to tweaking the EQ for watching Tom Cruise in Mission Impossible. I’ve so very much enjoyed my time with them that, after receiving it for review last week, I then went out and bought the wired alternative to use in my setup. Now that’s not to say Logitech’s wireless version wouldn’t be my first choice – it absolutely would be and well… still is – it’s just that I currently need to utilize a standard 3.5mm analog cable from my Go XLR and there’s simply no line-in port for me to take advantage of their low latency lightspeed technology on the lightspeed dongle – something perhaps for a 2.0. I guess that’s the point though… Logitech now offer both and the choice between wired or wireless is ultimately down to both you and your setup – and trust me when I say you’ll be happy either way.